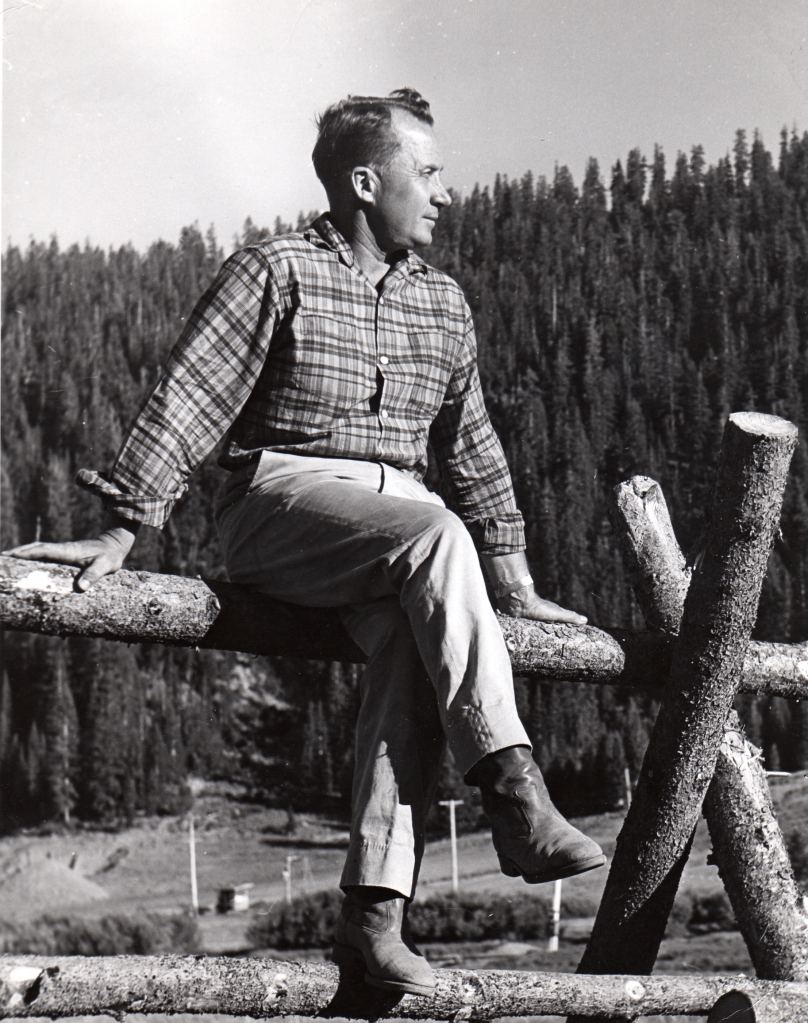 Wayne sitting on the fence that surrounded the meadow he fought to protect from Olympic organizers who wanted to pave it over and install an open sewage treatment plant. (Courtesy Poulsen Family Collection)

Wayne Poulsen was a pioneer in the ski industry and was instrumental in bringing the sport of skiing to the greater Lake Tahoe/Reno area. Poulsen grew up in Reno, graduated from Reno High School in 1933 and was the founder and first coach of the University of Nevada Ski Team. He started the first ski area and ski school in Nevada, Ski Tyrol, on Mt. Rose, then joined the war effort, training pilots during World War II. Wayne was born in 1915, opened the first ski resort in Nevada on Mt. Rose in 1938 and is best known as the founder of Squaw Valley, which would become an internationally celebrated ski resort, defining the American ski scene in the West after hosting the 1960 Winter Olympic Games.

However, Poulsen did not imagine this degree of international popularity for Squaw Valley; his vision was one of moderate, paced growth of this small community dedicated to skiing as a way of life.  Poulsen’s  vision to create a community devoted to skiing as a way of life would have important economic implications for our region and his efforts helped establish and define Reno/Tahoe as an adventure destination for the outdoor enthusiast.

Poulsen is emblematic of a certain kind of man of his generation. Like Ernest Hemingway, “Poulsen thrived on the thrill and challenge of outdoor adventure.”[2] Born in 1915, he came of age at the end of the Progressive Era; at a time when there was growing concern among many Americans about the over-urbanization of daily life. Industrialization had separated many young men from the athleticism inherent in their forefathers’ daily round. Skiing, in particular provided an antidote to the malaise, offering the opportunity to have an “authentic experience” of mother nature’s bounty combined with the challenge and thrill of conquering snow covered peaks and steeps; embracing the ‘manly’ virtues of the ‘strenuous life’ so famously extolled by Theodore Roosevelt as the source our physical and moral strength as a nation. [3]

Poulsen was inducted in the United States Ski Association National Ski Hall of Fame in 1980. In 2005, ten years after his death, the United States Board on Geographic Names officially designated Poulsen Peak in Olympic Valley in recognition of his dedication and contributions. (Courtesy Poulsen Family Collection)

Poulsen was a Boy Scout and an Eagle Scout and often said that his years with the Boy Scouts were some of the most important and influential moments of his life. He taught himself to ski and made his first pair of skis as a Boy Scout badge project. On a camping trip to Squaw Valley with his best friend while he was still in high school, he decided that it would be his life ambition to build a ski resort on those seven peaks surrounding the lush valley that provided a summer haven to local Basque shepherds and their flocks.

In 1932,  during his senior year in high school, Poulsen trekked into the unexplored back country of the Sierra Nevada, with Dr. James E. Church. Dr. Church, a professor at the University of Nevada, Reno, pioneered snow survey methodology that is still in use today. Poulsen worked with Dr. Church for the next five years, exploring and charting the mountains surrounding the Lake Tahoe Basin.

After graduating from the University of Nevada in 1937, Poulsen started the first ski resort and ski school in Nevada on Mr. Rose. When the war broke out, Poulsen quickly completed flight school to become an instructor. While waiting for his orders, Poulsen went up to Sun Valley, Idaho to work as a ski instructor. His first and only student that winter was New York socialite Sandy Kunau. They fell in love and were wed in August 1942 while he was on leave.

Poulsen and his wife, Sandy, shared a vision for Squaw Valley and worked together to bring that to fruition. (Courtesy Poulsen Family Collection)

In 1939, at the outset of World War II, President Roosevelt was eager to aid  Britain’s fight against Germany and his administration did not strictly enforce Neutrality Laws.[1]  Poulsen joined the Canadian Royal Air Force with a group of other American pilots, and became part of the Eagle Squadron. In December, 1941, following the bombing of Pearl Harbor, the United States entered the war and the Eagle Squadron became part of the Eighth Air Force. During the war, Poulsen served as a pilot and flight instructor, training glider pilots for Allied Invasion at Normandy and then for Operation Market Garden. His next assignment took him to the Far East and finished the war flying ammunition, men and supplies in the Pacific Theater.

While on leave in 1943,Wayne and his wife Sandy, purchased 640 acres in Squaw Valley from Southern Pacific Railroad. He would translate his passion for skiing and the outdoors into a community dedicated to skiing as a way of life. Wayne and Sandy built the first home in the valley in 1947. The next year, after a chance meeting in Alta, Utah with Harvard lawyer Alex Cushing, Squaw Valley Development Corporation was formed. Cushing, with his wife Justine, college chum Lawrence Rockefeller and a few of their close friends, came up with $400,000 and Poulsen traded his land for company stock.

Construction on the ski resort began in 1948 and Wayne’s vision was taking shape. But Poulsen and Cushing disagreed on many key points; it was an uneasy partnership from the start. In October 1949, just before Opening Day, Cushing called a board meeting. Poulsen, a full-time pilot for Pan Am, was out of town and unable to attend. Cushing owned 52% of the stock and his friends held another 46%. Poulsen was voted out as President and lost control of the company he founded. It is important to note that Poulsen did not imagine the degree of international fame Squaw Valley would garner following Cushing’s successful bid to host the 1960 Winter Olympics. He imagined a small resort community devoted to skiing as a way of life. It was his partnership and subsequent betrayal by Cushing that gave us the iteration of Squaw Valley that we know today.  That betrayal and the way it took place, highlights Poulsen’s particular ethos of masculinity. He embodied the Boy Scout code; he was honest, loyal, trustworthy and trusting. It was his blessing and his curse.

While loss of control over the ski resort was a huge blow, Poulsen did not miss a beat. Having exercised the option he had on the remaining 1200 acres in the Valley, Squaw Valley Land and Livestock Company was formed. After Cushing’s successful bid for the 1960 Winter Olympics, development exploded and real estate prices soared. While Poulsen never would earn so much as a single dollar from the ski resort he founded, he and Sandy were ultimately successful in building the community he envisioned. Today, streets in the valley bear the names of Wayne and Sandy’s family – a legacy to his contributions and accomplishments.

His story is in so many ways, quintessentially American and it cannot be fully appreciated or understood without also looking at his partnership of over 50 years with his wife, Sandy. They set out on wild adventures, embarking on a life-long quest to live each day to the fullest. During those early years, even before construction on the house began, Wayne and Sandy would spend most of the summer camping on the Squaw Valley meadow. “Sandy always said that it was tough going in the early days, but she had no complaints. She often recalled how peaceful the valley was and that although the couple had little in the way of material possessions, they were full of hopes and dreams.”[4]